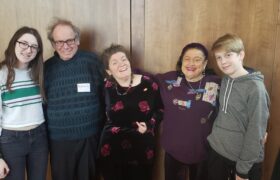 Roy Kessel was born in Israel, to South African parents. His parents left South Africa because they were anti-apartheid and did not want to raise children in such a segregated and racist environment.

At the age of 3, Roy’s parents relocated to Madison, Wisconsin so that his father could continue his studies towards obtaining his PHD in Agricultural Genetics.

Roy’s sister Sharon was born during that time and was unfortunately diagnosed with developmental disabilities. Though their parents were told by a top neurologist that Sharon would “never walk, never talk and never be toilet trained,” today, Sharon has accomplished all three, and MUCH MUCH more.  You can see some recent photos and speeches that were given to Sharon at her 50th Birthday party in 2019.

Roy was primarily raised in Madison, Wisconsin with a two year stint in Rechovot, Israel, as well as many trips back and forth to South Africa, to visit his Grandparents and other relatives.

After high school at Madison West, Roy attended the University of Wisconsin, where he majored in Finance and Marketing.

Roy has lived in the Chicago area since 1988. He practiced law in small firms for seven years before starting his own practice and also launching a sports marketing and management company named SportsLoop.

Roy has two children he has indoctrinated from an early age to be avid sports fans, especially for the Badgers, Packers and Blackhawks.

Roy continues to participate in many sports including hockey, tennis, golf, softball and more.